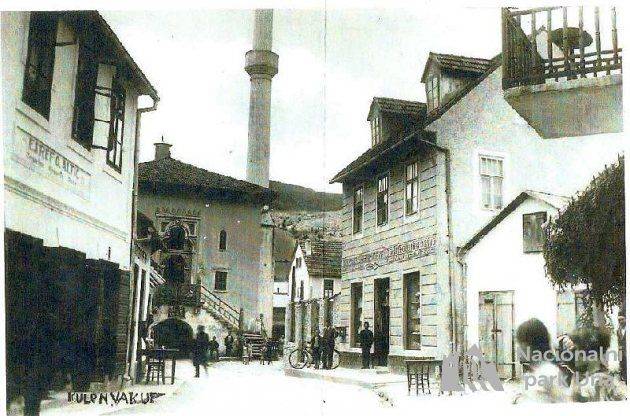 Sultan Ahmed Mosque in Kulen Vakuf was built between 1603 and 1613 and it was named after sultan Ahmed I, who ruled the Ottoman Empire at that time. It is interesting that underneath the mosque there are several shops and corridors to four sides and to enter the mosque you go up stone steps. The mosque was destroyed in the last war and reconstructed in late 90’s. The reconstruction followed original building plans and the shape and size of the mosque (12 x 17 m), but this time instead of original building material (hewed rock) bricks were used.

In official documents from the 18th century Kulen Vakuf was called Džisr-i-kebir, which means The Great Bridge in Turkish, and it is one of the towns which were founded at the period of Ottoman rule over Bosnia. The town first emerged on an artificial river island on the left riverside, so the Una ran next to the city walls with its armlet encircling the entire town. The main entrance gate of the town was on the bridge, and the other one was on the south side of the mosque. On the both sides of the bridge, above the water, erected on the tree trunks, there were houses and trade and workshops.

Kulen Vakuf is known as a birthplace of the first Reis-ul-ulema (the highest religious authority in a country) for Bosnia and Herzegovina, Mustafa Hilim ef. Hadžiomerović. In the autumn of 1882, after acknowledging the demands of the Bosnian Muslim elite, Austro-Hungarian authorities appointed (by the emperor’s decision from 17.10.1882) Mustafa Hilim ef. Hadžiomerović to the first Reis-ul-ulema for Bosnia and Herzegovina. The ceremony was conducted in Konak on 15.12.1882. He held his office until 1893.

The first mosque in Kulen Vakuf area was built in1523, soon after Ottoman Empire reached this region. When the troupes of Gazi Husref-beg conquered the medieval fortress of Ostrovica overlooking Kulen Vakuf., the first wooden mosque was built within the walls of the fortress, at its upper gate. It was later moved out of the fortress to the nearby village of Ostrovica.

However, one thing that has remained, since the time the mosque was first built, is a writing from the holy Quran, dedicated to every human and incurved above one of the corridors of the mosque which says: